It’s nice halvi… I mean having you back - we hope this is turning into a habit!  You’ve logged enough hours on WBS (training) adventures, so it’s time for a solo flight where it’s on you to explore unfamiliar terms and venture into uncharted topics.  This week we’ll discuss a pretty significant event in the blockchain world: only the 3rd time in history that the reward for mining a block of Bitcoin was reduced by 50% moving forward.  This happens once every four years, so it’s actually a bigger deal than the Olympics (for miners!).  Most importantly, you are now equipped with the foundation not only to understand what the h*ll this halving event actually means but also why it’s significant AND how it relates to many of the topics we have discussed previously.  There are a few new terms here that are in italics purposely -- that’s our way of nudging you to look them up.

Side note:  now that we’ve “aged” ourselves with this first current event related post...we hope that wherever and whenever you are reading this, you and your loved ones are healthy and doing well. 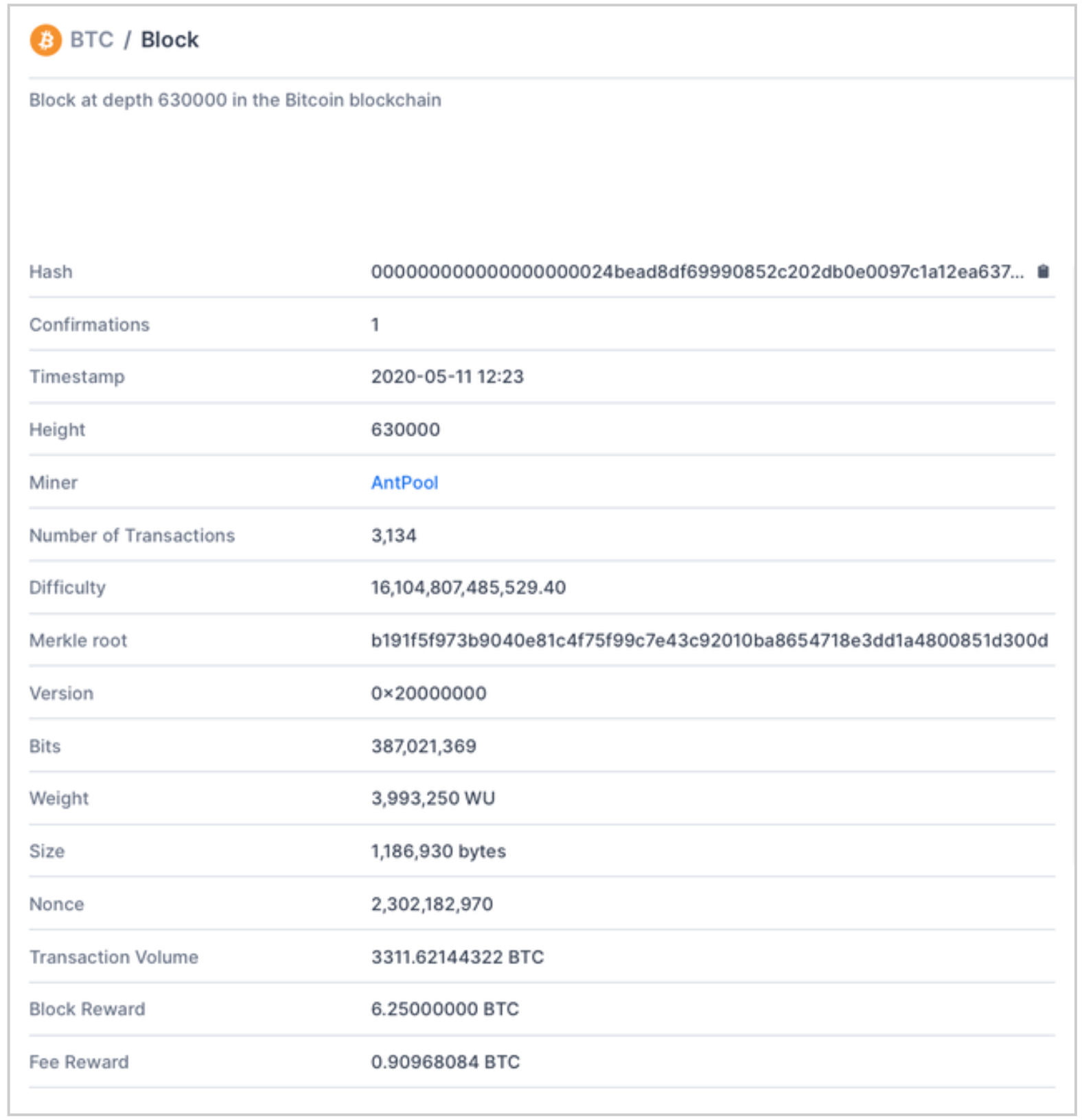 For a definition of a Nonce (because it’s the coolest sounding term) click here and you can search the rest of the terms there as well (Han SOLO style).

The way Bitcoin decreases block rewards is kind of intriguing because every 210,000 blocks mined (so approximately every four years) the reward is cut in half.  The reward for mining a block was initially 50 BTC.  The first reward halving, at 210,000 blocks in 2012, cut the reward to 25 BTC, then 12.5 BTC at block 420,000 in 2016, and now 6.25 BTC.  This process of halving will go on until around the year 2140, at which point the reward for mining block number 21,000,000 will be .00000001 BTC - the smallest unit of Bitcoin, also known as a Satoshi.  When Bitcoin was launched on January 3rd, 2009, it was decided that the supply of Bitcoin would be capped at 21 million - that’s all that can ever be mined, and there will never be more Bitcoin in circulation.  Think about what that means for the flexibility of the network’s monetary policy -- the option to “print” money when needed does not exist. Furthermore Bitcoins get lost sometimes, so the max supply is actually less than 21 million.  Now factor in diminishing rewards for miners who have and continue making massive investments in mining infrastructure, electricity costs and overhead, plus increasing computational difficulty, and less and less Bitcoin left to mine - and you start to see just how BIG of a deal this is (Click here for great charts).

Ok, a not so quick side-story:  Block 629,999 was mined by F2Pool (Interview with the founder), and it was the last block before the halving event (so the miner still received 12.5BTC). 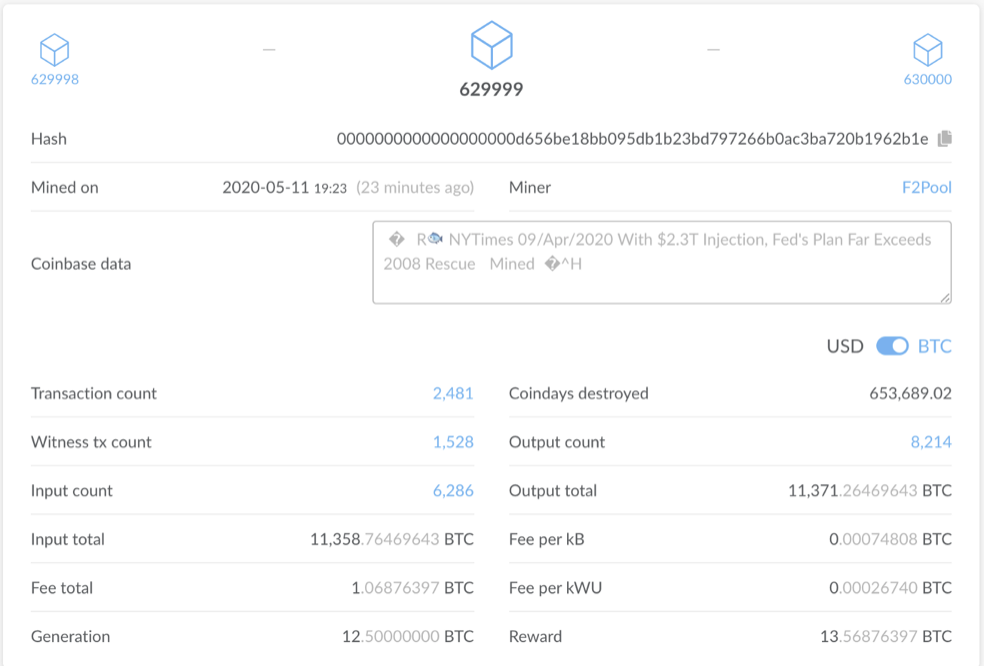 As you can see, the miner left this message in what’s called the coinbase data of the block: "NYTimes 09/Apr/2020 With $2.3T Injection, Fed’s Plan Far Exceeds 2008 Rescue.”  This is a reference to this article which was the miners’ way of paying homage to Satoshi Nakamoto, and his genesis block #0 containing the message “The Times 03/Jan/2009 Chancellor on brink of second bailout for banks.” 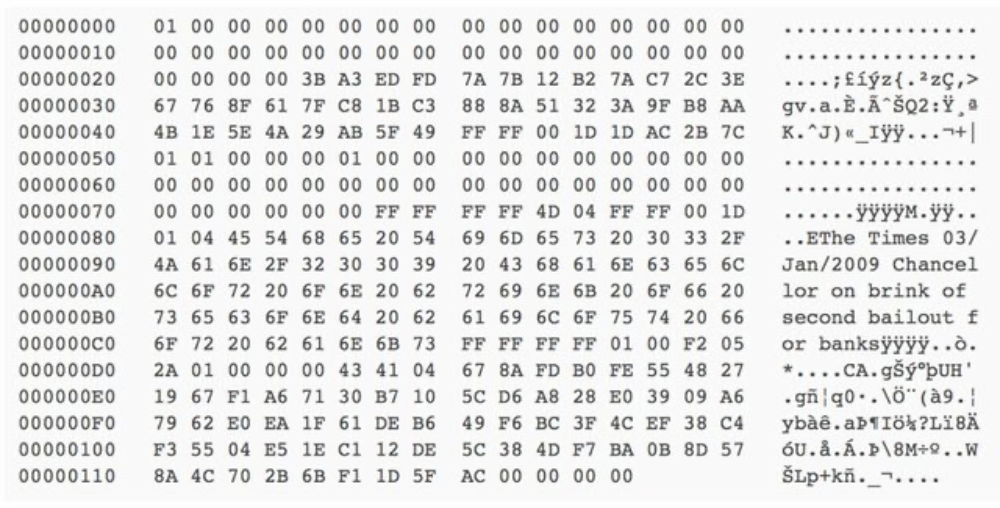 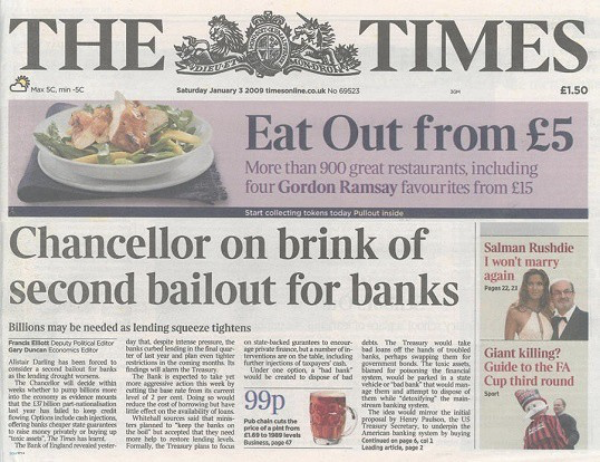 Don’t forget, Bitcoin was launched at the beginning of 2009 - in the thick of the financial crisis.  The message was Satoshi’s (or the network creators) way of saying Bitcoin is a better currency model, specifically because of its monetary policies limiting total supply, controlling inflation/deflation with autonomous predetermined changes to mining rewards, and changes to mining difficulty.

Let’s talk about implications and where you may want to go exploring from here.  Bitcoin is the most mature blockchain network that exists, so learning from events in the Bitcoin lifecycle will prepare you to understand the dynamics of other blockchain networks in the future - and their token valuations.  There’s a pretty wide range of opinions in regards to what halving the reward will mean for the price of Bitcoin (short term vs. long term), how it will affect hash rates, and for miners in general.  As a blockchain securities investor you may want to go on a recon mission to see what big crypto investors like Tim Draper and Mike Novogratz are saying about the possible outcomes of halving, and what the biggest mining operations are doing in response.  You may also want to know exactly what happened to the price of Bitcoin the last two times the reward was halved (hint: it went down, then up, then down).  Right now, there are about 18.3 million Bitcoins that have been mined, and a little less than that in circulation due to lost coins - meaning there are only about 2.5 million Bitcoin left to mine.  But because mining is expected to continue until the year 2140, there will be increasing competition among miners for less coins AND less reward.  To maintain a balance between ever more powerful mining operations and less Bitcoin - the difficulty of mining a block needs to be increased, and that has implications on the profitability of miners with older (less efficient) equipment and by extension higher energy costs.  Another consideration for investors is how scarcity can affect the price of Bitcoin, and on a macro scale whether this makes Bitcoin a “safer” investment during times of market turmoil and/or FED (quantitative) easing, or as a hedge (strong suggestion to look up Paul Tudor Jones and Bitcoin).  Lastly, miners can mine other crypto currencies if they feel there is more profit with the same overhead costs and equipment; fewer miners means a greater probability for a 51% attack, which is pretty much a death blow to a network’s (and token) value.  However, traditional economic theory (supply and demand) counters miner concerns. So that while the reward is half, the price of BTC will rise due to less supply, therefore having no net effect on miners - and this has proven to be accurate so far based on the last two halving events.

We STRONGLY urge you to read the Bitcoin whitepaper, it had a profound effect on this author's understanding of blockchain early on, and it’s mostly an easy and enjoyable read.

And for some fun, here’s a super interesting post about another hidden (but the same!) message in Bitcoins code. Also, Satoshi had a lot of great quotes.

As someone (pre-influencer) famous once said, “All good things must come to an end,” and so ends another chapter in the WBS.  This marks the first post that’s not solely focused on building your knowledge base, so if you enjoyed it, get ready to boldly go where no WBSer has gone before. We will remove the phrases “solo flight” or “training wheels” or “hand-holding” henceforth!!  Have a great week everyone.

P.S. If you’re itching to learn even more and have some free time on your hands, check out the next major event on Bitcoins schedule:  A soft fork that proposes to incorporate Schnoor signatures, Taproot schemes and Tapscript into the network base layer (L1) protocol. This article is a great start.